A meeting place for artist studios and creative production spaces, opened in 2005 under the leadership of Asya Filippova at the Moscow Technical Paper Factory. The project aims to create a comfortable space for work and creativity in Moscow and to become a platform for the presentation of non-profit art projects and supporting contemporary artists.

The history of the Center began with the opening of the exhibition “No Comment” which was a part of the First Moscow Biennale of Contemporary Art in 2005. Since then, exhibitions and festivals have become an important part of Fabrika’s life. Besides, Fabrika is one of the pioneers of the Artist in Residence program in Russia: an open studio that provides foreign artists with the opportunity to conduct research in Moscow, create an exhibition, and familiarize themselves with Russian contemporary art scene. Since the program was launched in 2008, more than 70 artists from Austria, Sweden, Switzerland, the Netherlands, the United States, Germany, South Korea, Finland, Brazil, and many other countries have taken part in it.

Since its very beginning, Fabrika has paid great attention to supporting contemporary Russian artists. In 2014, the Fabrika Studios’ project began, organized by Asya Filippova and Natalia Obelchak. It provides an opportunity for artists to get a place to work and create exhibitions. In 2015, with the support of E.K. ArtBureau, Fabrika presented a new, session-based part of the program. From now on, “mid-career” artists who are 35 years or older, and find it very difficult to find support in the Russian context of contemporary art, are being invited to participate. The winners of an open call receive a studio for ten months and a production budget for their projects, presenting the final result of their work in the exhibition spaces of Fabrika.

Since 2016, Fabrika has also been developing social projects: together with the curatorial group To Enter and to Permit, the team of the Center created a Museum of the Basmanny District. The group explores the history, culture, and memory of the area around the neighborhood.

Asya Filippova
Born April 30, 1969
1987 - 1992 – Moscow State University, Faculty of Economics, Department of Economic Cybernetics, Diploma on the topic “Operational Intracompany Management”
1993 - the beginning of work in the investment field.
2003 - Obtaining an MBA degree in production management
2003 - beginning of work as the General Director of OAO Technical Paper Factory "Oktyabr"
2005 - opening of the first exhibition space (project of the 1st Moscow Biennale of Contemporary Art) and the beginning of the work of the CCI "PROEKT_FABRIKA"

She was born and raised in a family of musicians and artists, which was reflected in her field of activity. Having become the director of the Oktyabr Technical Paper Factory, she began to develop a cultural project in part of the factory’s spaces, including an exhibition hall, a theater venue (together with the TsEKH theater agency) and workshops for young representatives of the creative industries. The project has become a unique example of the coexistence and interaction of material production and creative industries.

The Center for Creative Industries "Fabrika" operates on the platform of the oldest Soviet enterprise JSC FTB "October". Since 1924, various types of technical papers have been produced here: raw materials for printing, tracing paper, drawing paper and much more. However, the history of the factory space itself began much earlier - in the 70s of the 19th century.

In Perevedenovsky Lane, where the residents of the Moscow merchant class were “transferred” to the settlement - from which the name of the street came from - the enterprising wife of the collegiate secretary Elizaveta Andreevna Dislen bought the plot. It was she who laid the industrial zone here in the form in which it can be recognized to this day.

Initially, a business woman built a small one-story building under the FACTORY. Over the next 30 years, she managed to buy another half a dozen neighboring properties. It was then that the industrial character of this territory was designated. By the beginning of the 20th century, the Appretura Partnership was organized here - a community of workshops for the dyeing industry.

However, the heir to the founder of the Factory was not so nimble. A decade of his management led to the bankruptcy of the enterprise. As a result, it was sold for debts to a certain Mr. Khishin. The new owner launched a serious construction here - both new industrial buildings and houses for local workers.

The final unification of craft workshops took place after a series of historical events: the First World War, the Revolution and the Civil War. In 1924, the ownership of the partnership was nationalized and officially reorganized into one enterprise - the Oktyabr dyeing and finishing factory. Another five years later - in paper-dyeing.

The plant became a technical paper factory only in 1941. The Soviet authorities doubled the territory of the plant and invested considerable funds in the development. "October" was equipped with unique equipment. A special place was occupied by the production of coated paper for printing and the Olivier company producing it, which gave the name to the main exhibition hall of the Center today.

In 2005, the management decided to give part of the territories for non-commercial creative projects. 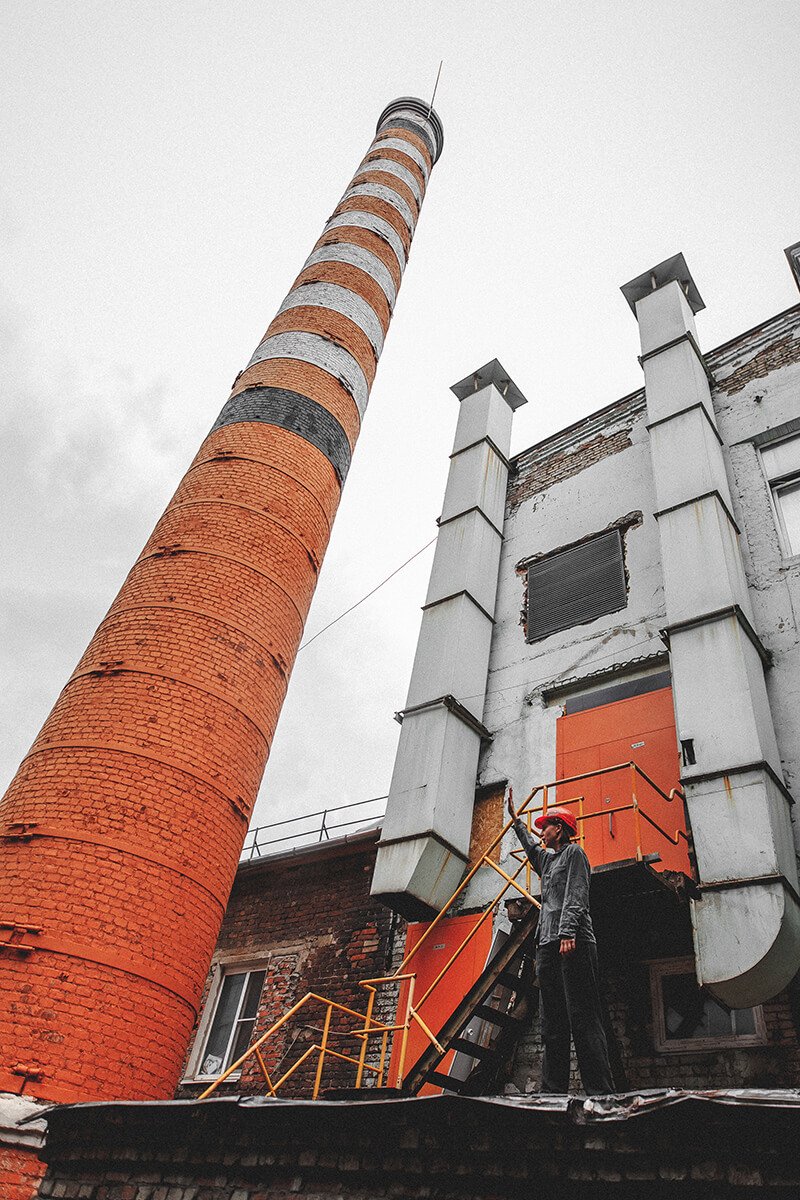